The Gay Centurion
Did Jesus Bless A Gay Relationship?

A Gay Centurion face to face with Jesus.

Paolo Veronese was an Italian Renaissance painter, one of the greatest masters of the Venetian school. His given name was Paolo Caliari but to honor Verona, the city of his birth, he adopted the name Veronése.

3. Were the Centurion and Pais a gay couple?

4. Did the Roman marriage ban encourage
same sex relationships in the Roman army?

5. Was the Centurion really gay?

6. Is there any evidence of an actual
gay marriage in the Bible?

A Gay Centurion
Comes Out To Jesus

For many centuries before Matthew and Luke wrote their Gospels, the Greek word pais was commonly used to refer to the younger partner in a same sex relationship. The younger partner was often an adult male but was sometimes a teenager.

The use of pais in this social and historical context leads some to believe that the story of the Roman centurion and his pais in Matthew 8 and Luke 7 tells the real story of the day Jesus met and blessed a gay man. Although this understanding of the text is controversial, it is important for us to discuss and understand it in our conversation about the Bible and homosexuality.

As we begin our study of this true story about a gay Centurion, from Matthew 8:5-13 & Luke 7:1-10, it is important to remember that we are two thousand years removed from these events. For that reason, the anti-gay side cannot prove their contention that the centurion and his pais-servant, were not same sex lovers. It is equally impossible to prove to everyone’s satisfaction, that this was a gay centurion and his pais-beloved-gay lover.

If we cannot prove, to everyone’s satisfaction, that this story is about a gay centurion, why bother discussing this controversy? The short answer is that scripture is important and what we believe, based on scripture, is important. For centuries, the organized church has insisted gay people are never presented in the Bible in a positive light.

Many Christians refuse to believe that God would include a positive story about a gay Centurion in the Bible. In recent years, many openly gay Christians have been excluded from the spiritual life of the church. Our goal is to examine the available evidence. If the evidence and a faithful believing approach to scripture supports the understanding that this story is about a gay centurion and his pais-same sex lover, that dramatic fact should be public knowledge.

Reproduction of a
Centurion Helmet.

While it may be impossible to prove to the satisfaction of everyone, that this is the story of a Centurion who was gay, it is certainly possible to make a principled judgment based on the weight of the evidence.

The Roman Emperor Augustus instituted a ban on heterosexual marriage for serving Roman soldiers, before the birth of Christ. The Roman marriage ban lasted until AD 197, when Septimius Severus ended it. This ban may have sparked same sex relationships in the first century AD Roman Army.

Is there any evidence of a gay centurion?

Does cultural, historical and textual evidence support our belief that the centurion and his pais were lovers in committed, same sex partnership? Those who believe that the Centurion’s pais was only a servant and not the same sex partner of the homosexual Centurion, cite Greek lexicons to prove their case. Because biblical Greek lexicons do not mention beloved or same sex lover as possible meanings of pais, most non-gay Christians insist that same sex lover could not possibly be the meaning of pais.

Is there cultural, historical and linguistic evidence which indicates that beloved or same sex lover is the probable meaning of pais in Matthew and Luke’s story of the centurion?


What was the meaning of
the Greek word, pais
in the first century context?


Remember, the first century AD is the time frame when pais was used in the Bible. Matthew and Luke, guided by the Holy Spirit, were led to use pais when describing the centurion's favorite and much beloved servant. Many languages use idiomatic expressions. Pais conveyed the idiomatic meaning of same sex lover. The idiomatic meaning of words derives from the way a particular culture uses a word. First century Greek and Roman culture often used the word pais with the meaning of "same sex lover."

What is an idiom?

Those are idiomatic expressions

with a meaning different from the literal meaning of the words used. Just so, the Greek word pais carried an idiomatic meaning for native Greek speakers for many centuries prior to Matthew writing his Gospel. The well-known and widely recognized idiomatic meaning of pais was "beloved or same sex lover."

That Matthew and Luke possibly used pais with the meaning of, same sex lover, raises the interesting possibility that Jesus met and blessed a gay centurion who was honest enough to come out to Jesus, to tell Jesus he was gay.

Remember, in our story, the Centurion uses the word pais to describe his sick servant. He is an utterly honest man and refuses to insult Jesus by asking for healing under false pretenses.

What would you do if you
were in Jesus' place?

What if you were in Jesus' place and the gay Centurion came to you, asking healing for his pais-beloved-partner?

Would you get in his face and tell him "You're going to roast in hell like a marshmallow if you don't stop being gay?"

Would you tell him "Sure I'll heal your partner if both of you promise to join Exodus International and become Ex-Gay"?

Or would you do like Jesus did and simply heal the beloved partner of the gay Centurion and affirm his remarkable faith in God?

What did the Greek word "pais" mean
to ancient Greek speaking people?

Thucydides writes of Agathon, 445-400 BC, the pais, same sex lover of Pausanias, King of Sparta, in History of the Peloponnesian War. Their relationship began when Agathon was 18 and continued for twenty years.

Eupolis, a playwright, 446-411 BC, references Agathon, an exceptionally good-looking man who, in his late teens, was the paidika or pais of Pausanias. Their same sex relationship continued to flourish when Agathon was in his thirties.

Plato in his Symposium, refers to the beloved and lover relationship, mentioning beloved eighteen times.

“If a state or an army could be formed only of lovers and their beloved, how could any company hope for greater things than these, despising infamy and rivaling each other in honor? Even a few of them, fighting side by side, might well conquer the world." And again, “Love will make men dare to die for their beloved - love alone.”

Plato’s Symposium was written after the conquest of Athens by Sparta. Sparta was celebrated for its homosexual warriors. This is the historical context Plato addressed as he discussed the meaning of lover-beloved, erastes-pais relationships in the Symposium.

Callimanchus, 305-240 BC, Greek poet and Chief Librarian of the famed Alexandrian library, wrote about the pais as same sex lover in his literature. 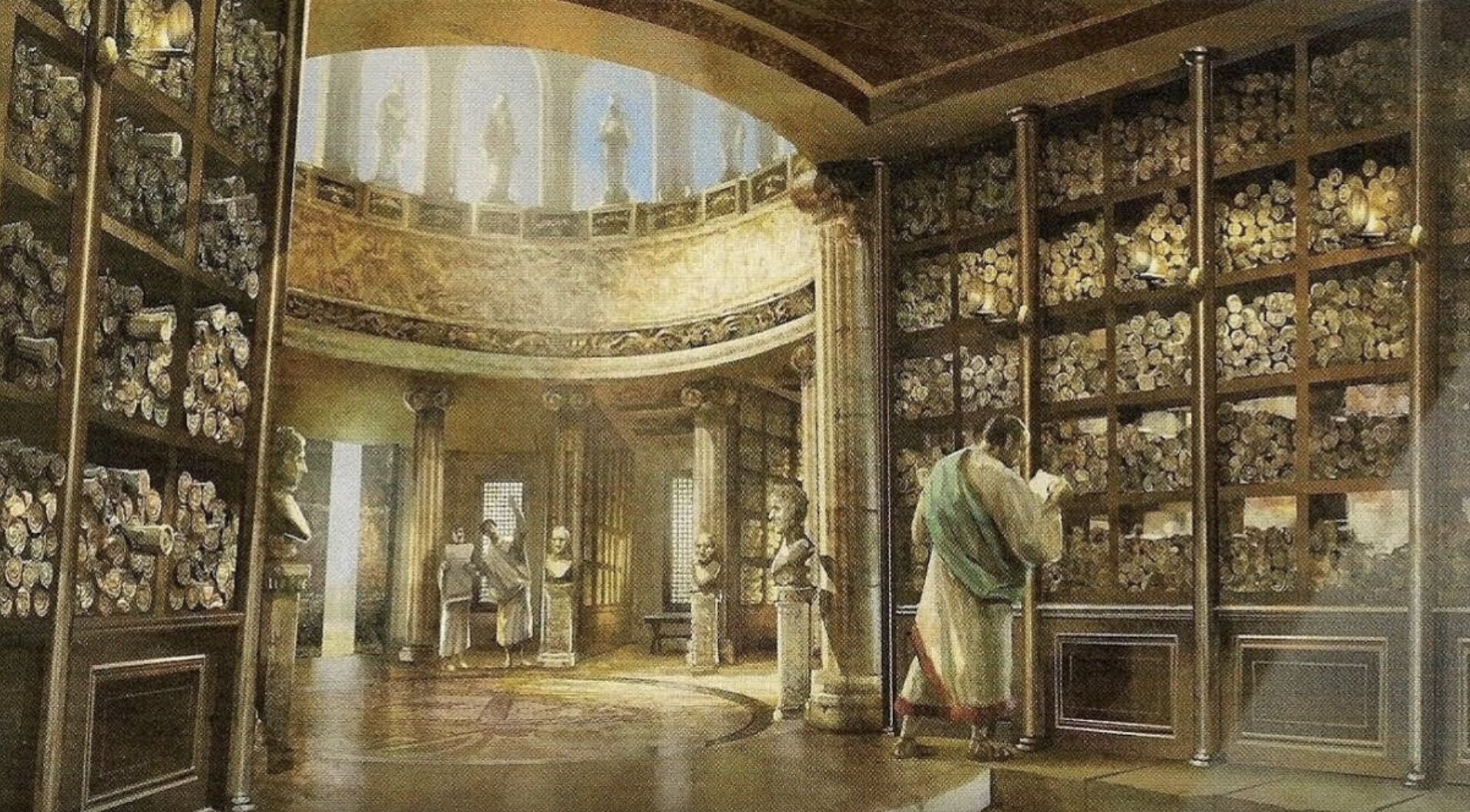 Ancient Alexandria, Egypt was a cosmopolitan city of Jews, Egyptians, Greeks and Romans, a prosperous trade center for East and West. This ancient library encouraged the mingling of different cultures and spiritual traditions. For a time Alexandria was the greatest center of learning in the ancient world.

Alexandria was also the center of pagan mysticism and the birthplace of schools of gnosticism. The Alexandrian library was the most famous library of the ancient world. It was part of a complex called the Alexandrian Museum or Temple of the Muses. The library and museum were founded in the 3rd century BC and maintained by a long line of Ptolemies, rulers of ancient Egypt.

An auxiliary library was established about 235 BC in the Serapeum, a temple dedicated to the god Serapis. The Alexandrian library systematically collected the knowledge of the ancient world and at its peak is estimated to have held 400,000 to 700,000 scrolls and papyri. In AD 272 the Alexandrian museum and main library were destroyed in the civil war under the Roman emperor Aurelian.

[The] "Sacred Band of three hundred chosen men... composed of young men attached to each other by personal affection... a band cemented by friendship grounded upon love is never to be broken, and invincible; since the lovers, ashamed to be base in sight of their beloved, and the beloved before their lovers, willingly rush into danger for the relief of one another.”

leading the sacred band
of warriors

That someone would use the Greek word pais to describe a gay Centurion would certainly not surprise the men we've listed. Why does this factual information surprise so many modern Christians? In ancient Greece, the word pais was widely used and understood as referring to someone in a same sex relationship. It was not unusual for Roman Centurions and Roman soldiers to have male servants with whom they had a sexual relationship.

Remember that Roman Law prohibited heterosexual marriage for serving Roman soldiers in the first century AD. From an historical perspective, a gay Centurion or a Centurion in a same sex relationship is not an unusual thing. Remember too that the Bible deals with the culture as it finds it. In the first century, referring to a Centurion's servant as his pais was like saying:

"He's a hairdresser in San Francisco!"

what pais meant when used in the context of a Centurion's beloved slave. We conclude that God can and does bless loving homosexual relationships like the one between a gay Centurion and his pais-beloved, as long as those relationships are within the Biblical moral framework - committed, faithful and non-cultic.

Was the centurion really gay?

Have you considered the gay analogy of Amram and Jochebed?

Have you examined these four popular analogies?

What about the amazing love story of David and Jonathan?

What was the sin of Sodom - Do you know?

Does Leviticus really say what you think it says?

Who were sodomites in the Bible??

Have you noticed the five
strong gay analogies in the Bible?


Are Old Testament family values
the same as your Christian values?


Christians under law - Is that
taught in the New Testament?