Does Leviticus Apply
To Christians Today?

No, Leviticus does not apply doctrinally
to modern Christians. 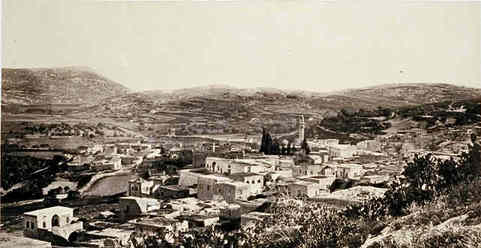 Nablus (ancient Shechem, between Mt. Gerizim and Mt. Ebal), was occupied by Samaritan Jews nearly two thousand years ago. This photo was taken around 1909.

Leviticus is important in the Bible but it was written to Jews living under the law in the land of Israel, not to Christians. Many Christians have a peculiar obsession with the Levitical holiness code and the topic of homosexuality. Unwilling to accept the clear statements of scripture about Leviticus, they insist that Jewish Law applies to everyone everywhere, from creation to eternity. This odd belief is absolutely contrary to what scripture actually says.

Leviticus and the Holiness Code
are for the children of Israel,
not for Christians.

Are these verses crystal clear?

Yes! Crystal Clear! Leviticus Is Written
To Israel, NOT To Christians!


Leviticus is written specifically for the children of Israel, containing laws and rules for Israel to obey as they prepare to occupy the land of Canaan.

Moses with the Ten Commandments.

Does God tell us, in the Bible, to whom the laws in Leviticus apply? Yes, God states precisely, to whom Leviticus and the Law applied. Moses writes under inspiration, 2 Timothy 3:16-17.

“The LORD made not this covenant with our fathers, but with us, even us, [the Jewish nation] who are all of us here alive this day.” Deuteronomy 5:3.

“This day” was around 1450 BC, when Moses originally wrote the Law that God gave him on Mt. Sinai for the nation of Israel.

First, the law of Moses did not apply to anyone before God gave it to Moses.

Read Deuteronomy 5:3 again and let it sink into your heart. Adam and Eve, Abraham, Isaac and Jacob were not under the law of Moses.

Second, God made His covenant of law, as given in Leviticus, in approximately 1450 BC, with Moses and the Jewish people who were getting ready to possess the land of Canaan, what we today call Israel.

The Holiness Code was not given to Abraham, Isaac and Jacob. They lived hundreds of years before Moses.

The Holiness Code was not made with everyone living on earth. It was a specific covenant with a specific people, the Jews, at a specific time in history, for specific purposes related to the specific situation in Palestine at that time.

The Molech idol, where pagans sacrificed their children to a false god.

The Holiness Code of Leviticus did not apply to anyone anywhere, until God gave it to Moses, for Israel to obey, in the land of Israel, Deuteronomy 4:5, 14, 5:31, 6:1.

Throughout Leviticus, Moses is speaking to the children of Israel, giving instructions for living in the land, under the Law. Moses is not setting down rules and regulations for Christians, in the twenty first century. The Holiness Code was intended to outlaw the pagan practices of fertility goddess cults in ancient Canaan.

It is important to distinguish
between Jews and Christians
as we interpret the Bible.

Christians do not show up in scripture until Acts 11:26, some fifteen hundred years after the Holiness Code was given.

The Law Of Moses went out of force
when Jesus died on the Cross.


If you don't understand that, you'll have difficulty understanding the difference between law and grace.


Jesus on the Cross


“Jesus, when he had cried again with a loud voice, yielded up the ghost.” Matthew 27:50, Old KJV

“Like a will that takes effect when someone dies, the new covenant [the New Testament] was put into action at Jesus’ death.” Hebrews 9:16, The Message.

The New Testament went into force
when Jesus died on the Cross.

"And behold, the veil of the temple was rent in twain [torn in two pieces] from the top to the bottom; and the earth did quake, and the rocks rent [were torn]. Matthew 27:51.

This is easy to understand because
the Bible is so clear and specific.


Matthew 11:13 tells us “For all the prophets and the law prophesied until John [the Baptist].”

Just so, when the Bible says "For all the prophets and the law prophesied until John" God is telling us that the Law is not in force forever. According to Jesus, the Law was only in force until John the Baptist.

The Old Testament Law
Had An Ending Point.

The Law ended when the Jewish Messiah, Jesus Christ, died for the sins of the world. Calvary and the old rugged Cross is the focal point of time and eternity! God's grand plan of redemption, with Jesus on Calvary's Cross, taking upon Himself the wrath of God against our sins, Romans 1:18, is the fulcrum of human history, the pivot point of our theology, the cornerstone of our Christian experience.

God never intended Leviticus 18:22 & 20:13 to be applied to Christians
in the twenty first century.

In Leviticus 18:1-3, Moses speaks to Jews, the twelve tribes of Israel, under the Law.

In Leviticus 18:22 and 20:13, God intends to prohibit shrine prostitution and Molech worship, that is, men having sex with men in worship of Ashtoreth, Molech's Canaanite fertility goddess consort.

We know that by the context.

Leviticus 17:7 and 18:3 and 18:21 set the context for Leviticus 18:22. God warns Israel against worshiping the goat idols, the goat demons, the pagan gods and pagan practices of Egypt and Canaan, also specifically mentioning Molech (which includes Molech's fertility goddess consort, Ashtoreth).

Leviticus 20:2-5 & 23 set the context for Leviticus 20:13. God makes the same warning against the pagan practices of Egypt and Canaan, specifically mentioning Molech. The rules God gives in Leviticus specifically target the children of Israel. They are God's rules for Israel, living under the Law, in the land of Palestine, at a particular time in history.

Christians are commanded to study the Bible, rightly dividing the word of truth, 2 Timothy 2:15.

"Study to shew thyself approved unto God, a workman that needeth not to be ashamed, rightly dividing the word of truth." 2 Tim 2:15.

"Rightly dividing" means to apply the scripture in its proper context. 2 Timothy 2:15 is God's warning that we must not take scripture out of context. All scripture is written for us but all scripture is not written to us to practice. For example, Old Testament Law required Jews to bring a ram or a lamb to the Tabernacle and give it to the priests as an offering for sin. Jesus became our passover Lamb.

For even Christ our passover [Lamb] is sacrificed for us." I Corinthians 5:7.

The Cross of Christ

The Cross Is The Great Dividing Point

Since Jesus died on the Cross, God requires no one, including Jews, to offer blood sacrifices at the Jewish Temple because Jesus has shed His sinless blood on Calvary. The sinless blood of Jesus appeased God's wrath by making a satisfactory offering for sin while also satisfying all the demands of God's justice and therefore, never needs to be offered again - once for all - one sacrifice for sins forever, Hebrews 10:10, 12, 14.

God no longer requires us to offer a blood sacrifice or to keep the Law in order to be right with God or to get saved. God requires us to accept Jesus' blood as the offering for our sins, a transaction that took place nearly two thousand years ago. Have you accepted Jesus' payment for your sins? Have you received the Lord Jesus Christ as your personal Savior from sin, hell and the wrath of God?

Scriptural Conclusions Based On
What The Bible Actually Says


Why Christians do NOT keep the Saturday Sabbath.

There is no logical analogy between ancient cult prostitutes who worshiped the fertility goddess and modern homosexuals.

If you cannot tell the difference between a mob intent on gang raping Lot and his angel visitors in Genesis 19 and a loving legal marriage between two men or two women, then you are struggling with a dishonest heart.

From Leviticus, Return to the Gay Christian 101 Home Page

The Hebrew word towebhah, which we translate as abomination never refers to homosexuality in the Bible.

I am saying that the Holiness Code was aimed at Israel,

Did you know that Christians are not required to keep the Old Testament Law?