Anti-gay Evangelicals admit
the Sodom story is NOT
about homosexuality

The Sodom story in Genesis 19 was never about gays or lesbians or homosexuality. 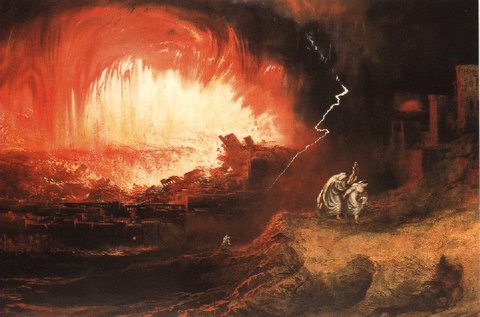 Lot flees the judgment of God


The Genesis 19 story has been used to attack gays and lesbians for hundreds of years but it is time for all Christians to admit the truth. After centuries of false teaching about what happened in Sodom 3800 years ago, anti-gay evangelical scholars admit the truth in writing. God's judgment on biblical S@dom had nothing to do with gays and lesbians.

Despite the facts, some Christians still teach that the S@dom story is about homosexuality. Isn't it time for everyone to admit that Genesis 19 is not about consensual gay relationships? Secular history and many statements in the Bible provide us with facts which flatly contradict the anti-gay view.

For 1800 years after the events in S@dom, Jewish prophets in the Bible and Jewish authors outside the Bible, understood that the issue was Inhospitality, not homosexuality.

S@dom is mentioned 48 times in the Bible and never in those 48 passages is homosexuality given as the cause of God's judgment. Isn't that interesting? Have you given that astonishing fact the weight it deserves in your thinking about this Bible story?

is a well-known evangelical author. He wrote The Moral Vision Of The New Testament, in which he defends the anti-gay viewpoint. Yet in spite of the fact that he regards all gay relationships as sinful, Dr. Hayes admits that:

the S@dom story “is actually irrelevant to the topic." [of homosexuality].

According to Dr. Hayes, the attempted gang rape in Genesis 19 shows the depravity of the Canaanite people who lived in the cities of the plain but:

"there is nothing in the passage pertinent to a judgment about the morality of consensual homosexual intercourse."

From Dr. Richard Hayes, in an article entitled, “Awaiting the Redemption of Our Bodies”.

prominent anti-gay author, admits the same thing in, The Bible And Homosexual Practice.


Although he too believes all gay relationships are sinful, on page 71 of his book, Dr. Gagnon tells us, The S@dom story in Genesis 19 "is usually viewed by modern Christians as the classic Bible story about homosexuality. However, to the extent that the story does not deal directly with consensual homosexual relationships, it is not an “ideal” text to guide contemporary Christian sexual ethics.”

"Such stories reflect a mindset that regards the rape of men by other men as abhorrent, but with regard to current questions concerning homosexuality, these texts have little to offer.

The stories speak only of the sin of homosexual rape and say nothing at all about consensual relations between persons of the same sex."


Dr. Brownlee, 1917-1983, an internationally renowned expert on the Hebrew language and the Dead Sea Scrolls said about the S@dom story:

- Dr. William Brownlee, Professor of Religion at the Claremont Graduate School and Professor of Old Testament at the School of Theology, Claremont, California.


"The context demonstrates that the demand of the men of S@dom was to have intercourse with the angels. This is evident in Lot's attempt to appease their desire to "know" the angels by offering them his two daughters who have never "known" (yada') a man (Gen. 19:8)...

Similarly, in Judges 19:23, when the men of Gibeah demand to "know" (yada') the stranger, his host offers them his own virgin daughter and the visitor's concubine. The concubine is given over to the men who "know" (yada') her all night. The clear meaning here is rape. Thus, the obvious conclusion is that yada' is used consistently in both instances to refer to sexual intercourse...

Thus, the sin of the two groups of men in Sodom and Gibeah is, in both instances, the desire to engage in homosexual rape. But there is validity in connecting this sin to the violation of the norm of hospitality. There is weight to the suggestion that the desire to rape the visitors is less the expression of homosexual desire and activity per se, and more the use of forcible homosexual rape to express dominance over the strangers. This practice occurred in the Ancient Middle East when armies were defeated, and it occurs today in certain all-male settings, such as prisons.

This is supported by the fact that in both instances, when women were offered to the men, both groups of men initially rejected the offer. The conclusion, more clearly for Sodom than for Gibeah, is that the goal of homosexual rape is the male inhabitants' desire to express their dominance over the strangers."

- Dr. Gene Haas, D. Th., Professor of Religion and Theology, Redeemer University College, Ancaster, Ontario, Canada, in a Global Journal article: Hermeneutical Issues in the use of the Bible to justify the acceptance of homosexual practice.


"Pro-gay theologians are correct in saying that this passage [Genesis 19] does not provide a strong argument [for] prohibiting all homosexual acts."

Thank you Drs. Hayes, Gagnon, Powell, Brownlee and Haas and thank you Bob Davies of Exodus International. This testimony from respected, theologically conservative, anti-gay evangelical scholars is astonishing and quite welcome.

When leading conservative evangelicals admit in writing that Genesis 19
is not about homosexuality
that is a huge step forward.

Consider the following. Leading conservative anti-gay evangelicals admit that the S@dom story is not about:

That lends support to our Bible believing gay Christian views on Genesis 19.

Gay-friendly heterosexual
scholar agrees that Sodom
is NOT about homosexuality.


“The “sin of Sodom” per Genesis 19 has to do with using sexual cruelty and violence to oppress and demean outsiders. It has nothing to do with homosexuality in the modern sense of sexual desire oriented toward members of one’s own biological sex, and certainly has nothing to say about the appropriateness or inappropriateness of loving, committed, sexual relationships between members of the same biological sex.”

Read the article by Dr. Chris Heard, in his blog, Higgaion.

That's what gay Christians
have been saying for years.

Gay Christian 101 - Spiritual Self-Defense For Gay Christians points out similar information from ancient Jewish prophets in the Bible and from extra-Biblical Jewish writers and ancient Christian preachers, concerning all of the "clobber passages."

Did you know that in the Bible:

As you explore the following helpful Links, you will discover that the Bible never mentions homosexuals when it tells
the story of Lot in Genesis 19.

That is one strong and logical reason the ancient Jews, for almost 1800 years after the destruction of S@dom, did NOT link the S@dom story to Homosexuality.


The mountains above Biblical Sodom after a thunderstorm.

2. The Babylonian Talmud views lack of Hospitality as the sin of in S@dom.

4. History And Scripture Clearly Identify The Sin in Genesis 19.

5. In The Bible, sodomites were shrine prostitutes, not homosexuals.

What is grace? A helpful explanation.

Can you explain how to be saved?

Our powerful 378 page eBook is like a college course:

Additional resources to continue
your study of the Sodom story.