Loving strangers was the command of a loving God in the Old Testament.

Camels in the desert

Imagine you are living in the Middle East of 2000 or 3000 years ago. In your travels, you discover there is no Holiday Inn where you can stop for the night. Travelers in ancient times relied on the hospitality of strangers for their comfort, their lives, their safety.

Loving strangers was a necessary part
of life in the ancient near east.

Not only was Israel commanded to treat strangers with kindness, God also commanded Israel to love strangers as they love their neighbors.

“Thou shalt not avenge, nor bear any grudge against the children of thy people, but thou shalt love thy neighbor as thyself: I am the LORD.” Leviticus 19:18.

“But the stranger that dwelleth with you shall be unto you as one born among you, and thou shalt love him as thyself; for ye were strangers in the land of Egypt. I am the LORD your God.” Leviticus 19:34.

Hospitality or loving strangers
in the New Testament

1. The Testimony of Jesus About Hospitality. 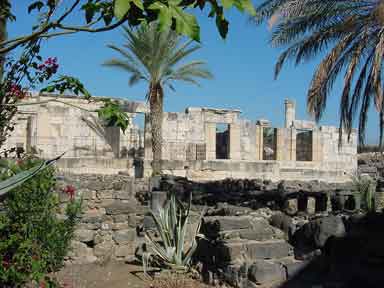 Capernaum was one of the places Jesus lived during His earthly ministry to Israel. It was the scene of several important stories in the gospels. The Pharisees were often adversarial and once asked Jesus this question. “Which is the great commandment in the law?” Matthew 22:36-40.

If Jesus had the viewpoint of a modern Pharisee, He might have quoted Leviticus 18:22 or 20:13, "Thou shalt not lie with mankind as with womankind: it is abomination" and lowered the boom on gays as many modern Christians love to do. Instead, Jesus looks the Pharisee legalists in the eye and calmly paraphrases Leviticus 19:18 and 34, the hospitality ethic.

“Thou shalt love thy neighbor as thyself.”

I'll bet those ancient Pharisees were as angry and disappointed with Jesus' answer as modern Pharisees seem to be. What is it about Pharisees in any age that they love to disagree with Jesus? It's almost as if they've taken seminars on how to be obnoxious or how to always get it wrong or how to claim to be a Christian while disagreeing with Jesus Christ.

Jesus refused to say anything
negative about gays and lesbians!

Here was the perfect opportunity to slam "those disgusting queers" but Jesus refused to parrot the prejudices of modern Pharisees. That's not what Jesus was about. We all know that Jesus was not shy about expressing His views. Read Matthew 23 to discover how caustic Jesus could be to religious charlatans.

According to Jesus, loving God and loving neighbor were the most important commandments in the law. If we had to boil down all of the law and the prophets to just two succinct and pithy propositions, according to Jesus they would be:

These two commandments sum up the entire Old Testament but have you ever tried to obey those two simple commands? It's not as easy as it sounds. Modern Christians who so frequently rip Leviticus 18:22 and 20:13 out of context and apply those verses to gays need to meditate on Jesus’ response to the Pharisees in Matthew 22:36-40. Isn’t it odd? When it comes to loving strangers like gays, it seems that modern Pharisees who profess to follow Jesus, disagree with Jesus as often as did ancient Pharisees.

Some scholars locate ancient Sodom
near the southern end of the Dead Sea.

Modern Christians are a lot like
the people of ancient Sodom -
they lack hospitality.

Sometimes it seems like modern Christians inherited the mean-spirited inhospitable genes of their spiritual ancestors in ancient Sodom. Instead of loving strangers they have a peculiar obsession with keeping the law and a strange inability to show hospitality to gays with whom they disagree.

If modern Christians had any knowledge of how ancient Jews viewed the Sodom story, perhaps they would be not be so anti-gay. The Babylonian Talmud, Sanhedrin 109, makes it clear. For 1700 years after the destruction of Sodom, ancient Jews linked the Sodom story to Inhospitality, not Homosexuality.

2. Jesus points out rude inhospitality
in the life of Simon the Pharisee


In the ancient near east, a host showed hospitality to his guest by treating him with loving kindness.


Providing water for washing the feet, greeting a guest with a kiss on both cheeks, offering olive oil scented with fragrant spices to anoint the hair, demonstrated hospitality - loving strangers - in a practical way.

Inhospitality, which could be defined as not loving strangers, was a huge and grievous sin to our pre-Christian ancestors and to Jesus. The Sodom story in Genesis 19 is an example of Inhospitality but what about Inhospitality in the New Testament?

During His earthly ministry, when Jesus visited the home of Simon the Pharisee, Simon performed none of those hospitable acts and Jesus publicly remarked on it to Simon.

In Psalm 23:5, David is full of thanksgiving because Jehovah anointed his head with oil. Simon the Pharisee is not at all like his heavenly Father and Jesus points out Simon's inhospitality. Hospitality was such an important issue to our Lord Jesus that it is the only sin He mentions when He discusses Sodom, Matthew 10:15. When Simon the Pharisee did not treat Him hospitably, Jesus rebuked Simon publicly, in front of the other guests. Isn't that interesting? Isn't that remarkable?

Would Jesus rebuke you for your lack of hospitality to your gay brothers and lesbian sisters? Are you doing anything to remedy the situation?

Jesus placed great importance on Hospitality and yet, modern Christians who profess to love and follow Jesus repeatedly model Inhospitable behavior toward the gay community. If you truly love and follow Jesus, you cannot continue to behave inhospitably toward your gay brothers and lesbian sisters. Vicious vituperative wicked language against gays and lesbians is not following Jesus. Using the power of government to deny civil rights and human rights to gays and lesbians is not following Jesus.

3. The Testimony Of The New Testament.

a. Christians are commanded to be hospitable to strangers.

“Be not forgetful to entertain strangers: for thereby some have entertained angels unawares.” Hebrews 13:2.

b. Paul tells us Christians should be “given to hospitality.” Romans 12:13.

c. One of the requirements for the office of bishop in the New Testament Church was to be “given to hospitality.” I Timothy 3:2.

d. One of the requirements for an ordained elder was to be “a lover of hospitality.” Titus 1:8.

In the modern world, gays are "strangers" to the community of faith. Gays and lesbians are often treated with vicious and mean spirited Inhospitality. Most churches do not want us unless they can convince us to live under bondage to Old Testament Law. Apparently modern Christians dislike the New Testament book of Galatians and are determined to disobey the Holy Spirit.

Did it ever occur to you that inhospitality, one of the sins of Sodom, is the sin the modern church most frequently commits against gays?

At least in a spiritual sense, modern Christians are the real sodomites in the twenty first century. They are not willing to place themselves under Old Testament Law but they attempt to put gays in bondage to Old Testament Law, although that is contrary to the biblical command in Galatians 5:1.

How many pastors do you know who show love for homosexuals in practical ways? How many churches minister to the gay community, apart from attempting to bring us under bondage to the Law? Instead of living like the Jesus they profess to love and practicing Hospitality to others, ministering to gays in a kind and loving way, many pastors seem intent on belittling, name-calling and ostracizing gays.

e. Peter reminds Christians to “Use hospitality one to another without grudging.” 1 Peter 4:9.


Today, philoxenia, loving strangers and showing hospitality is the way Christians should treat the gay community.


Reaching out in love to those who are despised and rejected, to those who are spiritually wounded, can begin to heal broken hearts and set the captives free. God searches our hearts, knows our thoughts and understands our motives. Has your behavior toward gays obeyed God's command to "love strangers" and show hospitality? If not, what practical steps will you take to get your heart right with God and remedy the situation?

Will you obey the
clear teaching of scripture? What really happened in ancient Sodom?

Jesus identified the sin of Sodom
and it was not homosexuality.

Inhospitality As The
Sin of Sodom.

History And Scripture Are
Clear About The Sin Of Sodom.

In The Bible
sodomites were not gay.