Does 1 Corinthians 7:1-9
Cancel Gay Marriage Or Civil Union
For Lesbians and Gays? 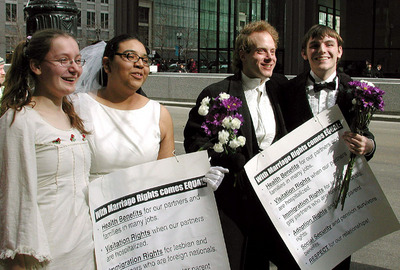 “Nevertheless, to avoid fornication, let every man have his own wife, and let every woman have her own husband... But if they cannot contain, let them marry: for it is better to marry than to burn” [in lust]. -1 Corinthians 7:1-9

Scripture provides a wonderful
principle for our civil unions.

In 1 Corinthians 7, I understand Paul to be speaking in a general sense. Because about 95% of humankind is non-gay, Paul naturally addresses himself to the majority but the principle of "it is better to marry than to burn” in lust also holds true for the 5% of us who are gay and lesbian. Just as heterosexuals want to marry an orientation compatible partner, so gays and lesbians want the same legal privilege, to marry an orientation compatible partner, according to the principle set forth in 1 Corinthians 7.

We know from scripture that God also blessed polygamous marriages, Genesis 4:19 and Deuteronomy 21:15-17, so we know that God did not intend us to read Gen 2 as strictly as non-gay traditionalists read it.

We also know that Jesus Himself pointed out in Matthew 19:11-12 that born eunuchs cannot receive His teaching about Adam and Eve style marriage.

Please note that in Matthew 19:11-12, Jesus carefully differentiates between eunuchs who voluntarily abstain from marriage for the kingdom of heaven and born eunuchs, who are excluded from the Adam and Eve marriage paradigm but who are not forbidden committed, faithful, non-cultic gay marriage or civil union.

1 Timothy 3:1-12, prohibits polygamy for Bishops and deacons but nowhere in the New Testament is polygamy forbidden for any Christian who is not a Bishop or deacon.

Modern objections to polygamy
are based on culture, not scripture.

This is not to argue for polygamy. It simply makes the point that scripture does not prohibit polygamy except for two groups, bishops and deacons and scripture also does not prohibit gay marriage or civil union. The objection to same sex relationships is culture based or sometimes, culture war based instead of scripture based.

"Wherefore as by one man sin entered the world and death by sin, and so death passed upon all men for that all have sinned." -Romans 5:12

Obviously, if we read Romans 5:12 in the same strict, literal sense that traditionalists insist we must read 1 Cor 7:1-9, we would have to conclude that women are not sinners because women are not mentioned in Romans 5:12. The verse literally says men.

Common sense tells us that women are sinners just like men are sinners and that Romans 5:12 is referring to all of humankind (Greek ἄνθρωπος = ánthrōpos), not just males.

The Bible, in 1 Corinthians 7:1-9, and the Holy Spirit assisted common sense also instruct us that it is better for a gay man to partner with another gay man instead of burning in lust and it is better for a lesbian woman to partner with another lesbian woman instead of burning in lust. It's a matter of reading scripture with a bit of good old fashioned common sense based on life experience.

Equal rights for gays and lesbians

Gay marriages are a civil right!

All about sex for gays?