Are Gay Marriages An
Important Civil Right To You?


Gay Marriages? It's only equality
if they are, in fact, equal.

"A guarantee of equality that is
subject to exceptions made by a majority
is no guarantee at all."

"A guarantee of equality that is subject to exceptions made by a majority is no guarantee at all."

"We are firmly convinced the exclusion of gay and lesbian people from the institution of civil marriage does not substantially further any important governmental objective.

The legislature has excluded a historically disfavored class of persons from a supremely important civil institution without a constitutionally sufficient justification."

- Iowa Supreme Court, from their unanimous decision affirming the civil right of gays and lesbians to marry, April 3, 2009.

"Marriage is one of the “basic civil rights of man,” fundamental to our very existence and survival…

To deny this fundamental freedom on so unsupportable a basis as the racial classifications embodied in these statutes, classifications so directly subversive of the principle of equality at the heart of the Fourteenth Amendment, is surely to deprive all the State’s citizens of liberty without due process of law.

The Fourteenth Amendment requires that the freedom of choice to marry not be restricted by invidious racial discrimination.

Under our Constitution, the freedom to marry, or not marry, a person of another race resides with the individual and cannot be infringed by the State."

Gay agenda or the law of the land?


"All persons born or naturalized in the United States and subject to the jurisdiction thereof, are citizens of the United States and of the State wherein they reside. No State shall make or enforce any law which shall abridge the privileges or immunities of citizens of the United States; nor shall any State deprive any person of life, liberty, or property, without due process of law; nor deny to any person within its jurisdiction the equal protection of the laws." -Section 1 of the Fourteenth Amendment to the U.S. Constitution

California acknowledged in 1948
what everyone else
NOW acknowledges is right.

California Supreme Court Chief Justice Ronald George, in the May 15, 2008 decision, writing for the majority, cited the 1948 decision which reversed California's ban on interracial marriages, to support gay marriages.

The Iowa Supreme Court, in their unanimous April 3, 2009 decision, cited an 1839 Iowa Supreme ruling about slavery to justify their decision legalizing gay marriages.

(and that illuminate why this right has been recognized as one of the basic, inalienable civil rights guaranteed to an individual by the California Constitution), we conclude that,

under this state’s Constitution, the constitutionally based right to marry properly must be understood to encompass the core set of basic substantive legal rights and attributes traditionally associated with marriage that are so integral to an individual’s liberty and personal autonomy that they may not be eliminated or abrogated by the Legislature or by the electorate through the statutory initiative process.

These core substantive rights include, most fundamentally, the opportunity of an individual to establish — with the person with whom the individual has chosen to share his or her life — an officially recognized and protected family possessing mutual rights and responsibilities and entitled to the same respect and dignity accorded a union traditionally designated as marriage. Gay marriages.

As past cases establish, the substantive right of two adults who share a loving relationship to join together to establish an officially recognized family of their own — and, if the couple chooses, to raise children within that family — constitutes a vitally important attribute of the fundamental interest in liberty and personal autonomy that the California Constitution secures to all persons for the benefit of both the individual and society.

Furthermore, in contrast to earlier times, our state now recognizes that an individual’s capacity to establish a loving and long-term committed relationship with another person and responsibly

We therefore conclude that in view of the substance and significance of the fundamental constitutional right to form a family relationship, the California Constitution properly must be interpreted to guarantee this basic civil right to all Californians, whether gay or heterosexual, and to same-sex couples as well as to opposite-sex couples." Gay marriages are a civil right.

Is it fair to compare
racial equality with
gay marriage equality?
The Atlantic, Aug 3, 2010

This was morally indefensible, but very different than a total exclusion of gays from the institution of marriage. Throughout much of America, gays are effectively banned from marrying, not simply certain types of people, but any compatible partner period.

Unlike heterosexual blacks in 1960, the ban gays suffer under is unconditional and total and effectively offers one word for an entire sector of Americans--Die. For evading that ban means virtual--if not literal--suicide.

A more compelling analogy would be a law barring blacks, not from marrying other whites, but effectively from marrying anyone at all. In fact we have just such an analogy. In the antebellum South, the marriages of the vast majority of African-Americans, much like gays today, held no legal standing.

Of course African-Americans, gay and straight, in 1810 lacked many other rights that gays, of all colors, today enjoy. Thus, to state the obvious, being born gay is not the same as being born a slave. But the fact is that in 1810, the vast majority of African-Americans--much like the vast majority of gays in 2010--lacked the ability to legally marry.

Race and Gay Marriage in Perspective,
August 3, 2010, The Atlantic 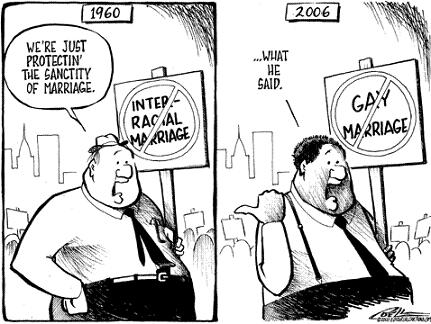 Just protectin' the sanctity of marriage?

"When my late husband, Richard, and I got married in Washington, DC in 1958, it wasn't to make a political statement or start a fight. We were in love, and we wanted to be married.

We didn't get married in Washington because we wanted to marry there. We did it there because the government wouldn't allow us to marry back home in Virginia where we grew up, where we met, where we fell in love, and where we wanted to be together and build our family.

You see, I am a woman of color and Richard was white, and at that time people believed it was okay to keep us from marrying because of their ideas of who should marry whom.


When Richard and I came back to our home in Virginia, happily married, we had no intention of battling over the law. We made a commitment to each other in our love and lives, and now had the legal commitment, called marriage, to match. Isn't that what marriage is?

Not long after our wedding, we were awakened in the middle of the night in our own bedroom by deputy sheriffs and actually arrested for the "crime" of marrying the wrong kind of person. Our marriage certificate was hanging on the wall above the bed...

We left and got a lawyer. Richard and I had to fight, but still were not fighting for a cause. We were fighting for our love.

The freedom to marry has long been recognized as one of the vital personal rights essential to the orderly pursuit of happiness by free men, a basic civil right.

My generation was bitterly divided over something that should have been so clear and right. The majority believed what the judge said, that it was God's plan to keep people apart, and that government should discriminate against people in love. But I have lived long enough now to see big changes. The older generation's fears and prejudices have given way, and today's young people realize that if someone loves someone they have a right to marry...

I am still not a political person, but I am proud that Richard's and my name is on a court case that can help reinforce the love, the commitment, the fairness, and the family that so many people, black or white, young or old, gay or straight seek in life. I support the freedom to marry for all. That's what Loving, and loving, are all about." Gay marriages.

-Written by Mildred Loving to commemorate the 40th (June 12, 2007) Anniversary of the Loving vs. Virginia Supreme Court Decision.

When Gay Marriage Was A Rite

Read about the most famous gay couple in the Bible - Jonathan and David.

The idea that modern American, Christian family values existed in the Old Testament does not quite fit the facts of history.