Romans 1 And Homosexuality
What Is The Biblical Context?

The Palatine Hill in Rome

Romans 1 and homosexuality is a real hot button topic in the twenty first century. These ancient ruins are all that remain today of the pagan temples, including the temple of Cybele, public buildings and private palaces which dotted the Palatine Hill in first century Rome.

the ancient Middle Eastern fertility goddess, referred to by the Romans as the Mother of the gods.

Is homosexuality the focal point of Paul's argument in Romans 1? Our common sense answer is No.

The Romans 1 and homosexuality argument wrongly reads modern views into a first century document. But you can get the truth here.

A priest of Aphrodite,

No reference to Sodom in the OT mentions homosexuality
or lesbianism.

Scripture cannot mean NOW
What it did not mean THEN.

Romans 1 and homosexuality? Early Christians who lived within 100 years of Paul (like Aristides and Justin Martyr), understood that Paul was talking about shrine prostitution related to idolatry, a sin which was endemic in first century Rome.

So there is no misunderstanding, as in the Old Testament, all ten New Testament references to Sodom neglect to mention homosexuality.

Cybele, Mother of the gods

and Protectress of ancient Rome, in her chariot pulled by lions. This particular fountain is in Spain. Idolatry, not homosexuality and not lesbianism, is the pivot point of Paul’s argument in Romans 1. When discussing Romans 1 and homosexuality, we must be absolutely honest about the text.

Paul Talks About Gentile Idolatry
In Romans 1,
Not Gays And Lesbians

For this cause [idolatry] God gave them up unto vile affections: for even their women did change the natural use into that which is against nature:

And likewise also the men, leaving the natural use of the woman, burned in their lust one toward another; men with men working that which is unseemly, and receiving in themselves that recompence of their error which was meet. Romans 1:26-27

Idolatry is the hook that catches Gentiles and Jews and allows Paul to declare everyone guilty before a holy God, Romans 3:23.

Throughout the Old Testament,
Gentile idolatry manifested itself
in shrine prostitution.

Idolatry and shrine prostitution are the specific context of Romans 1.

Paul heard Stephen preach against
the Molech idol in Acts 7:43
and it stuck in his mind. 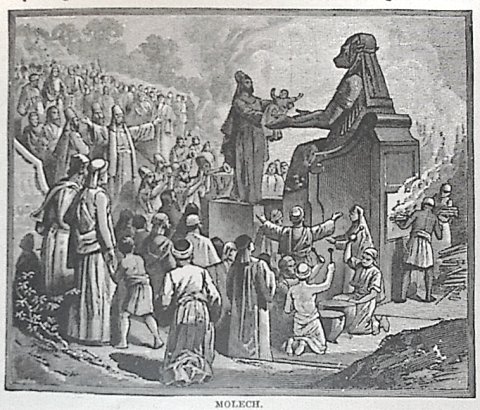 The Molech idol, which no one should worship!

Years later, when Paul writes Romans, he has in mind fertility goddess worship, which in the Old Testament, is addressed under the rubric of Molech worship. Paul does not name Molech in particular because first century Romans worshipped multiple fertility goddesses, Cybele and Aphrodite, for example.

The stoning of Stephen


The Apostle Paul was present to hear Stephen's sermon against Molech worship and watched him die a martyr's death. Stephen's sermon in Acts 7, in which he mentioned Israel's wicked worship of Molech, made a deep impression on Paul, who got saved, Acts 9, within a few months of Stephen's martyrdom. When Paul writes Romans 1, he even repeats Stephen's phrase about "God giving them up."

No. Paul's words in Romans 1:26-27 better fit the context of Paul’s experience of hearing Stephen preach against idolatry and Molech, Acts 7:43. That context plus the intertextual echoes from Old Testament passages, link the idolatry of Romans 1 to the shrine prostitution of first century Rome, not to homosexuality.

My 378 page eBook, Gay Christian 101 - Spiritual Self-Defense For Gay Christians, goes into more detail on this topic. Romans 1 and homosexuality is a false correlation which is not supported by the historical context or the biblical context.


“Because that which may be known of God is manifest in them; for God hath shewed it unto them.” - Romans 1:19

God revealed Himself to the Gentiles through their conscience. Long before He gave the Law on Mt. Sinai, God’s law was:

“written in their hearts, their conscience also bearing witness, and their thoughts... accusing or... excusing one another.” - Romans 2:15

“For the invisible things of him from the creation of the world are clearly seen, being understood by the things that are made, even his eternal power and Godhead; so that they are without excuse:” - Romans 1:20

The human race is without excuse because God revealed Himself to us through:

“Because that, when they knew God, they glorified him not as God, neither were thankful; but became vain in their imaginations, and their foolish heart was darkened. Professing themselves to be wise, they became fools,” - Romans 1:21-22

The Law of Cause and Effect

Now think about that for a moment. Romans 1 is clear. God gave them up because of idolatry, not because of gays and lesbians,not because of homosexuality or lesbianism.

The same sex practice Paul mentions was shrine prostitution in worship of the fertility goddess. The most prominent fertility goddess in first century Rome was Cybele, who had five temples in her honor at the time Paul wrote his Epistle to the Romans. Cybele as Mater Deum, Mother of the gods, was also honored on Roman coins.

The stoning of Stephen.


When Paul frames his argument about Gentile idolatry, he has in mind Stephen's words in Acts 7.

Stephen preached against Molech worship in the last sermon of his life.

whose temple atop the Palatine Hill loomed over ancient Rome, was worshiped by Romans in the first century AD, when Paul wrote his epistle to the Romans.

The shrine prostitution Paul describes is part and parcel of his larger argument about idolatry.

Romans 1 and homosexuality? The context of all three exchanges is idolatry, not lesbians and not gay men.

Citing idolatry to differentiate
between Gentiles and Jews
was a common rhetorical device
in the first century AD.

Romans 1 and homosexuality? No. In Romans 1, Paul's comments seem to echo the pseud-epigraphal book Wisdom of Solomon, using a similar three part statement about Gentile idolatry. Wisdom of Solomon was a well-known book in the first century so it fits historically that Paul would allude to something with which his Roman readers were familiar.

“For the worshipping of idols not to be named is the beginning, the cause, and the end, of all evil.” Wisdom of Solomon 14:28.

Idolatry, not gays and not lesbians,
is the specific context
of Paul's argument in Romans 1.

Romans 1 and homosexuality? We must always be careful to read scripture in context instead of reading our twenty first cultural views into scriptures written thousands of years ago. Too many Christians read their own presuppositions into scripture and attempt to make the Bible say something it does not say. The Romans 1 and homosexuality misinterpretation is a perfect example of that.

When read in historical context and in the context of Paul's life experience, we come to a very different conclusion. Romans 1 is talking about shrine prostitution in worship of the fertility goddess. Shrine prostitution was practiced in Rome in the first century.

Shrine prostitution is certainly how Paul's first century readers understood his words in Romans 1 and that is how we ought to understand Romans 1.
Helpful Links to additional information.

There are four popular analogies which are used to validate Gay Relationships as blessed by God.

The amazing true love story of Jonathan and David is the greatest human love story in the Bible.

The Centurion’s pais? Was he the same sex partner of the gay Centurion?

Did you know that Christians are not required to keep the Old Testament Law to be right with God?