Gay Couples In The Bible

Gay couples in the Bible raises questions
and ignites some interesting discussions. 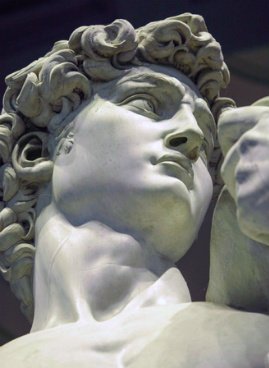 Gay couples in the Bible? When gay people read the Bible, we see gay couples that heterosexuals miss.

Here are four of the most famous gay couples in the Bible, at least, many people believe they were gay or bisexual. And for your edification, we include another gay guy - the first individual in the New Testament recorded as getting saved by grace through faith - the Ethiopian eunuch.

In my opinion there is not enough factual information about Naomi and Ruth or Daniel and Ashpenaz, to thoughtfully conclude that they were gay couples. I list them here because some people believe they were gay. The Link for Ruth and Naomi does present some interesting material which thinking Christians should consider.

Non-gay Christians dispute that any of these Bible celebrities were gay. However, it seems unlikely that in a book like the Bible, which covers four thousand years of human history, there would be absolutely no gay people. Even the most vocal anti-gay Christians cannot prove that assertion. In any case, let’s look at what some view as the most famous gay couple in scripture and see if the Bible gives additional insight.

“Then David took hold on his clothes, and rent them; and likewise all the men that were with him: And they mourned, and wept, and fasted until even, for Saul, and for Jonathan his son, and for the people of the LORD, and for the house of Israel; because they were fallen by the sword.” 2 Samuel 1:11-12.

It is impossible for every love story
to have a happy ending.

Many non-gay Christians insist there are no gay couples in the Bible. They read the story of David and Jonathan and conclude they were just platonic friends. Given the fervent pathos with which the Bible describes their relationship and the fact that this is the longest and best-described human love story in the Bible, the non-gay Christian conclusion seems strangely lacking in spiritual discernment.


The Hermitage titles this painting, “David’s Farewell From Jonathan.”

Rembrandt painted this around 1660. The painting is in St. Petersburg, Russia, at the Hermitage Museum. Some art historians believe this painting depicts King David and his son Absalom being reconciled, not Jonathan and David.

When Jonathan and David parted company for the last recorded time in 1 Samuel 23:16-18, they undoubtedly believed they would be together again. It is possible they had numerous meetings between their last recorded meeting and Jonathan’s untimely death in battle against the Philistines, 1 Samuel 31:2. Yet scripture records no further meetings. Jonathan disappears from the narrative until his death in battle. 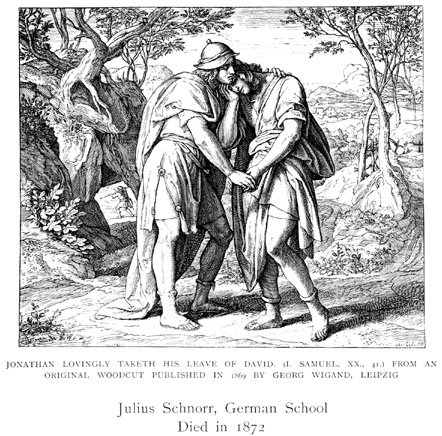 David has just returned from a military campaign against the Amalekites when he learns, from an Amalekite, of Jonathan’s death, 2 Samuel 1:1-5, 1:13. By this time, the bodies of Saul and his three sons, have been defiled and hung from the city wall of Bethshan, 1 Samuel 31:8-13.

Did the Philistines behead Saul as payback because David beheaded Goliath in 1 Samuel 17:51-54? David’s grief over the death of Saul and Jonathan is voiced in lamentation as David writes and sings his first Psalm recorded in scripture, 2 Samuel 1:19-27.

Is It Really Possible There Are Gay Couples In The Bible? Here Is
David’s Emotional Public Eulogy.
You Be The Judge

“Saul and Jonathan were lovely and pleasant in their lives, and in their death they were not divided: they were swifter than eagles, they were stronger than lions. Ye daughters of Israel, weep over Saul, who clothed you in scarlet, with other delights, who put on ornaments of gold upon your apparel.

How are the mighty fallen in the midst of the battle! O Jonathan, thou wast slain in thine high places.

I am distressed for thee my brother Jonathan: very pleasant hast thou been unto me: thy love to me was wonderful, passing the love of women.

God Knew That Homosexuality
Would Be Controversial

God has a wise purpose for everything He allows. Knowing the controversy homosexuality would cause in the modern church, God inspired Samuel to record David's unambiguous statement about his loving partnership with Jonathan.

after David killed Goliath, by Gottfried Bernhard Goz, 1708-1774. Do David’s unambiguous words about Jonathan support or deny the view that there are no gay couples in the Bible?

David’s words are so startlingly clear that many non-gay Christians
say to themselves,

"Gay couples in the Bible? He couldn’t possibly mean that, could he?"

To which gay Christians reply,

"Well, since David said it, he must have meant it. And since God quoted David in scripture it is definitely true!"

David’s character shines in his
eulogy for Saul and Jonathan

Although Samuel anointed David King in 1 Samuel 16:13, some fifteen years earlier, David was content to wait for many years as God orchestrated circumstances to actually put him on the throne. Have you ever experienced how difficult it is to wait upon God and keep to His timetable instead of yours? Two times David could have killed Saul and seized the Kingdom. Both times David refused to harm the LORD’s anointed.

Now, with King Saul dead, David sorrows because for all his faults, Saul was Israel’s first King, anointed by God. David also sorrows because Israel has been defeated by enemies who should have been driven from the land hundreds of years earlier, in the original conquest, Joshua 13:2-3. And most of all, David sorrows because the great love of his life is gone, killed in battle. For David, there will never be another love like Jonathan.

Gay couples in the Bible?

David's public mourning for Jonathan indicates that his soldiers and all Israel knew the intensity of their intimate relationship.

David and Jonathan’s loving intimate relationship was public from beginning to end. If someone was objectively looking for gay couples in the Bible, it seems like David and Jonathan would leap off the page.

Think about it. Jonathan could not have maintained a fifteen year, intimate relationship or visited David in his wilderness stronghold without willing cooperation from his and Saul’s soldiers, who covered for him, and from David’s soldiers, who insured Jonathan’s access to David.

David’s acknowledgment of his enormous loss

is as public as their covenant of love, 1 Samuel 18:3, and a covenant of the LORD, 1 Samuel 20:8, 17. Jonathan and David were the celebrity superstars of their day. Every action in battle, every word uttered in public, was subject matter for discussion. At the time David writes and sings this Psalm for Jonathan, he is married to at least three wives.

Yet scripture does not tell us David’s wives felt bitter jealousy when David publicly proclaimed Jonathan’s love more important, more fulfilling, and even surpassing the love of his wives. They felt David’s loss and grieved with him for Jonathan. David’s loving polygamous family shared his unfathomable loss and his broken heart.


We gain fascinating insight into David’s love for Jonathan from the words used in the Hebrew text.


Some gays believe Kronberg intended this painting to represent David and Jonathan, rather than David and Saul, as the title suggests. David’s public eulogy in front of his soldiers, pays loving tribute to Jonathan, the partner given to him by Jehovah, 1 Samuel 20:8.

That Hebrew word ach meaning "brother" reminded David’s testosterone fueled army of the fifteen year partnership they facilitated between two men who planned to rule Israel together, 1 Samuel 23:17. Because there was nothing shameful or dishonorable about Jonathan and David’s intimate love, David feels free to memorialize their love in front of his army. When David remembers Jonathan, he is still entranced by their timeless love.

David emphasizes the pleasantness
of their mutual love

The Hebrew word for love is ahabah. It conveys the idea of romantic sexual desire. The Hebrew word for wonderful is pala’ which conveys a sense of the wondrous, surpassing, beyond one’s power to express, extraordinary. The love Jonathan demonstrated for David was so powerful, David the artistic poet-warrior of Israel has difficulty adequately describing it.

No Gay Couples In The Bible?
Are You Absolutely Sure Of That?

If Jonathan and David were not a gay couple, why did David use the same word to describe Jonathan's love as he used to describe the love of his wives?


The Hebrew word, ahabah, occurs twice in this passage, both times translated love. David uses the same Hebrew word to describe Jonathan’s love as he used to describe the love of his wives.

Think about that! It is important because it goes to the whole point of the Jonathan and David relationship. David was an eyewitness, a participant. He was personally involved in this intimate romantic 15 year long sexual relationship.

The same word that describes Jonathan’s love for David also describes the love of David’s wives for David.

How could God and David and the human authors of scripture make it any more clear? David and Jonathan were committed romantic intimate long-term sexual partners.

Gay Couples In The Bible? David is memorializing far more than nonsexual friendship when he sings of Jonathan’s incredible love for him.

Read 1 Samuel 20:17 again and remind yourself that God put that in the Bible for a reason. Are you gay or lesbian? Do you have a friend or family member who is gay or lesbian? Did it ever occur to you that God placed this story in the Bible to affirm His blessing on committed faithful non-cultic gay and lesbian relationships and on gay marriage? Pray about that for a while.

God loves His gay and lesbian children and He did NOT leave us without affirmation of our relationships. David, the greatest hero of the Old Testament and a wonderful type of Christ is presented in scripture as a bisexual and/or a same sex attracted man who intimately loved another man.

David sings his eulogy, accompanying himself on his harp, in front of his hard-charging, testosterone-laden, Philistine-fighting, army of mighty men.

According to the Bible and King David, Jonathan won that contest hands down. Have you considered that David's army does not desert him? No one trots out Leviticus 18:22 and 20:13, divorces them from their context of shrine prostitution and insists to the grieving King that gay relationships are wrong and his loving covenant partnership with Crown Prince Jonathan was sinfully wrong.

In the ancient near Eastern cultural context, men did not enjoy intimate nonsexual friendships with women to whom they were not related by consaguinity (blood relationship) or affinity (marriage relationship).

David’s analogy, comparing Jonathan’s love for him to the love of his wives, is a strong public statement of the intimate, romantic, emotional, sexual nature of David and Jonathan’s relationship.

And in case you missed it, please reread 1 Samuel 20:30. King Saul, an eye witness to their relationship, who knew David and Jonathan as well as anyone could know them, believed they were sexually intimate and blasts Jonathan with a crude Hebrew vulgarism in a furious argument with his son.

After reading the Jonathan and David story as God the Holy Spirit presents it in scripture, it is difficult for any honest Christian to conclude that there are no gay couples in the Bible.

Non-gay Christians, absolute Complementarians and most traditionalists utterly reject the possibility that David’s eulogy for Jonathan has any sexual implications. What do you think?

The amazing love story of Jonathan and David is the greatest human love story in the Bible.

The Babylonian Talmud has a lot to say about Sodom but never mentions homosexuality.

From Gay Couples In The Bible, Return To Gay Christian 101.com Home Page.