Why and how was the Bible mistranslated? The old King James Bible is the most accurate and the most gay friendly Bible in the English language. It never uses the word homosexual and it carefully identifies shrine prostitutes as worshipers of the Canaanite fertility goddess instead of saying they are homosexuals.

Most Biblical Greek lexicons in the twentieth century made the mistake of defining Greek words like the malakos stem (malakoi) and the arsenokoit stem (arsenokoitai) to mean homosexual. They do this based on breaking down the word into its parts, instead of paying attention to how Greek speaking people in the first fourteen centuries of church history actually used the word in writing.

Breaking down a word into its parts to determine meaning is often a goofy unscholarly way to define words. For example, the English word mandate does not mean, a date with a man or a man on a date or a man who likes to eat dates. Mandate refers to authority or permission to do something. Breaking down this word into its constituent parts does not help us define the word.

Let's look at the English word, scholarship. Obviously, if we break down this word into its parts, scholars and hip, we discover that it refers to a scholar's hip, a hip being a joint in the human body. Scholarship does not then, as we might suppose, imply great learning. Instead, it is a reference to the largest joint in the human body. Breaking down this word into its constituent parts does not help us define the word.

Of course, I'm using absurdity to make a point. We do not determine the meaning of the Greek word, arsenokoitai, arseno = man and koitai = bed, by breaking it down into its parts. Insisting that arsenokoitai means a man who sleeps with men, when no Greek speaking person used the word that way in the first 14 centuries of church history, is just too silly for words. It is hard to respect "scholars" who define words that way. Breaking down this word into its constituent parts does not help us define the word.

That kind of pseudo-scholarship led some Bible translators to conclude that verses like 1 Cor 6:9 and 1 Tim 1:10 condemn homosexuals because they use the Greek word, arsenokoitai. As I demonstrate on my pages about malakoi and arsenokoites, the historical record is clear that those words rarely, if ever, were used in ancient times to mean homosexual.

The Bible is God's inerrant, infallible word. Yet some versions like the NIV sneak the modern word homosexual into their translation. That causes confusion in the body of Christ and has caused gays and lesbians much heartache down the centuries. 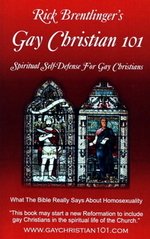 The problem with using the word homosexual in ANY Bible translation is that homosexual is a recent word. It came into usage in Austria and Germany in the 1860s and began appearing in English language dictionaries around 1900. For the first 1900 years of church history, no one used the word homosexual because it did not exist as a word in that time period.

Obviously, if the word homosexual, with all its modern connotations, did not exist when the Bible was written, it is wise not to use that word when translating the Bible. If God or the human authors of the Bible intended to reference gay partnerships which are unrelated to fertility goddess worship, they could have done so by using ancient Greek or Latin words from that time period.

It's interesting that every verse in the Bible which is alleged to prohibit homosexuality is in the context of fertility goddess worship. The life-changing information on this website presents the truth about gays and the Bible if you will read it and take it to heart.

You asked another question.


Were the Illuminati behind mistranslating the Bible? I do not have much information about that particular topic but a book, New Age Bible Versions, by G.A. Riplinger which I read years ago, linked Greek manuscript experts like Westcott and Hort to spiritism and may provide information you will find interesting. It is also available through Amazon at this Link.

Do you know the real
meaning of arsenokoitai?

FREE PDF
Words they left out
of most new Bibles