David loved Jonathan. God reminds us of this important fact by recording in scripture, David’s moving eulogy for Jonathan. Jonathan, ever the valiant warrior, died in armed combat with the Philistines.

“Then David took hold on his clothes, and rent them; and likewise all the men that were with him: And they mourned, and wept, and fasted until even, for Saul, and for Jonathan his son, and for the people of the LORD, and for the house of Israel; because they were fallen by the sword.”  2 Samuel 1:11-12.

David loved Jonathan and all of David's mighty men were aware of that fact. For fifteen years they had facilitated David and Jonathan's relationship, enabling them to meet secretly, without King Saul discovering where David was hiding.

Every love story doesn't have a happy ending. When D and J parted for the last time recorded in the Bible, they undoubtedly believed they would see each other again soon, 1 Samuel 23:16-18. 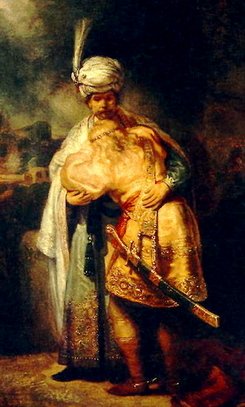 Reconciliation of David and Absalom, by Rembrandt van Rijn, 1642

It is possible Jonathan and David had numerous meetings between the last recorded meeting in I Samuel 23:16-18 and Jonathan’s death fighting the Philistines, I Samuel 31:2. Yet scripture records no further meetings. Jonathan disappears from the narrative until his untimely death in battle.

David has just returned from a military campaign against the Amalekites when he learns, from an Amalekite, of Jonathan’s death, 2 Samuel 1:1-5, 1:13. By the time David hears the awful news, the bodies of Saul and his three sons, have already been defiled and hung from the city wall of Bethshan, 1 Samuel 31:8-13.

David loved Jonathan. His grief over the death of Saul and Jonathan is voiced in lamentation as David writes and sings his first Psalm recorded in scripture.

“I am distressed for thee my brother Jonathan: very pleasant hast thou been unto me: thy love to me was wonderful, passing the love of women." 2 Samuel 1:19-27.

David loved Jonathan. Nothing in the text indicates that David enjoyed deep, long-term, personal, nonsexual friendships with women to whom he was not married.